Rickets, chewed-off tails and traumatic isolation: The sad lives of pet monkeys in the UK and the sanctuary that’s saving them

Marmosets are usually found in forests, snacking on nectar and insects in tight-knit family groups. So when one turned up at a train station in Scotland, it appeared that he was more than a little lost. It is thought he had escaped from his nearby home in Cambuslang, on the outskirts of Glasgow, before making his way to the busy station. But this is not a one-off occurrence – metropolitan monkeys are a growing trend.

Dr Alison Cronin is the director of Monkey World, a primate rescue centre in the Dorset countryside. 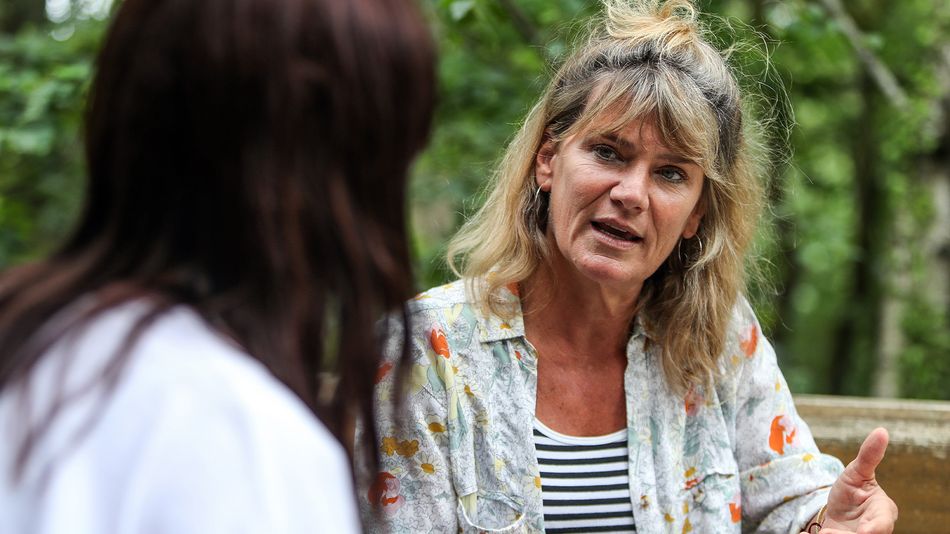 It was set up in 1987 by her husband Jim as a sanctuary for chimps who spent their lives being paraded up and down Spanish beaches as photo props for tourists. Now it is home to more than 250 animals, ranging from orangutans to macaques to woolly monkeys. And while you may assume they were all rescued from far-flung countries, almost half were actually saved from the UK pet trade.

It is estimated that up to 5,000 monkeys may be being kept in living rooms, sheds and gardens across the UK. For decades this has been perfectly legal. Anyone could buy a monkey online or at a pet shop as easily as a goldfish. A lot of well-meaning owners may think their little monkey – most often a marmoset or tamarin – will live a fruitful, happy life with them at home. But these animals end up with debilitating medical issues and deep psychological trauma.

The first thing Alison did when we sat down for a chat was present a mounted skeleton of Betty Boo, a marmoset who had been kept by an elderly woman. Even to the untrained eye, her deformities are striking. 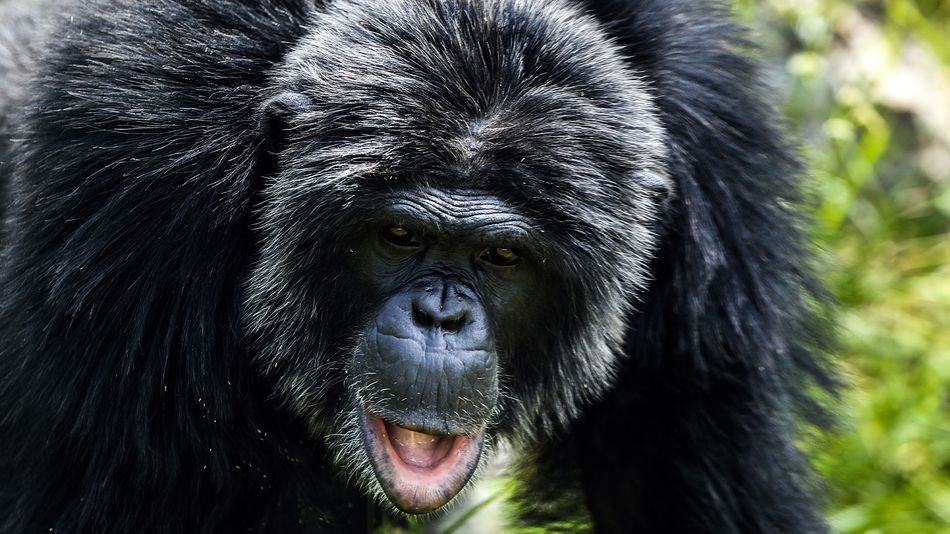 Bryan the chimpanzee arrived at Monkey World on 7th December 2006. He was smuggled from the wild in Africa, through Cuba

‘Betty Boo was rescued from a well-meaning nice older lady who kept her in a bird cage in her sitting room for a number of years,’ Alison said. ‘The lady’s health was deteriorating, and before anything happened she wanted to make sure Betty Boo had a good home. So we went and got her.

‘She lived here for years. She was a stubborn old lady herself but had to deal with profound disability. Betty Boo had an acute case of rickets, leaving her crippled with a bent spine and femur. Her tail was broken in several places, and she also had several teeth missing. Almost all of the primates we get in from the pet trade have a degree of metabolic bone disease,’ Alison said.

‘It’s simply bad husbandry. It’s totally fixable and preventable, but if you aren’t a specialist in terms of primate care then this is what happens. It’s chronic and it’s awful. I feel bad for a lot of well-meaning owners who don’t realise, but ignorance is no excuse.’ 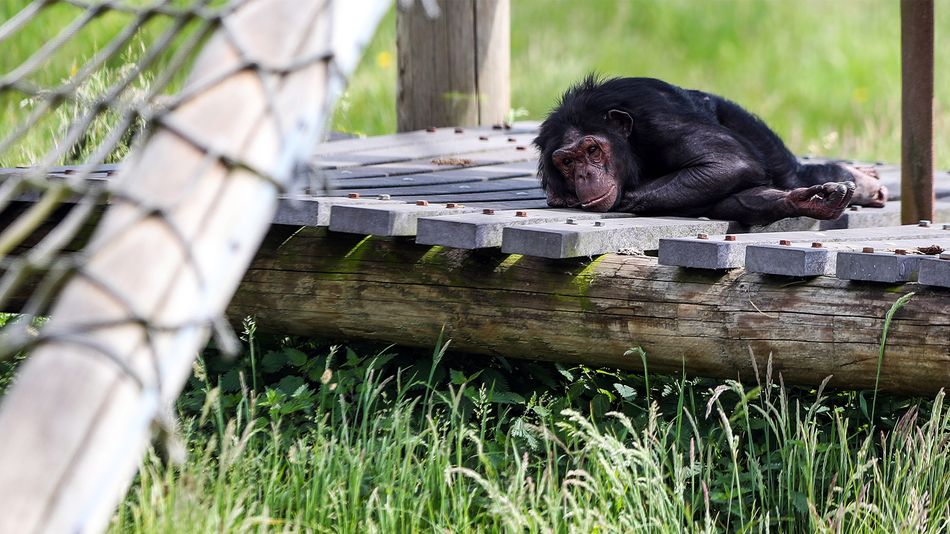 Kiki the chimpanzee was smuggled from the wild for the illegal pet trade in Lebanon. She arrived at the park on 16th January 2011 and it’s estimated that she was born during 2002

Unfortunately some animals also escape their homes – one way or another – and find themselves on the streets of Britain. Alison has previously been called to court to give evidence after a monkey jumped out of a window in London and was found wandering the streets below. Luckily it was rescued before it came to any further harm – but that’s not always the case.

Three years ago, the body of a primate, thought to be a black-tufted marmoset, was found dead on a north London street. The animal had been hit by a car and left squashed on the road. ‘There’s a growing and scary trend of us finding marmosets in the streets of Tower Hamlets, leaping from scaffolding pole to scaffolding pole,’ Alison said. ‘These animals are loose in London. Roaming the streets. You couldn’t write a lot of this stuff.’

When I visited Alison’s rescue centre myself, I was handed a binder titled: ‘Call for evidence on welfare of primates as pets.’ The front cover features a collage of faces – dozens and dozens of monkeys – which represent all the victims of the UK pet trade that Monkey World has rescued.

There’s Evi, a hybrid marmoset who was sold from a pet shop to a pub in Altrincham before being saved. 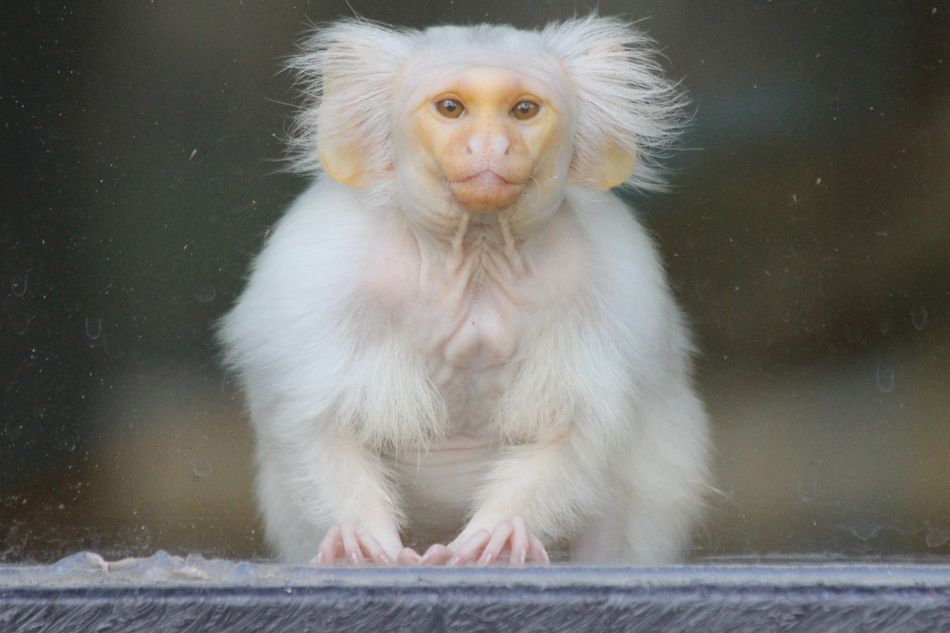 Evi – female Common Marmoset – arrived at Monkey World on 21st February 2013, having been rescued from a small cage in a pub

Then there’s Clydie and Charlie were kept in a bird cage in Liverpool and were found to have bending bones and signs of organ failure when they arrived at Monkey World.

And there’s Gismo, who was rescued in 2004 in Ipswich. Alison was forced to ‘boot in the shed door’ that was housing the capuchin monkey. ‘The shed was supposed to be his warm, safe place to shelter’, Alison said. ‘It was soaking wet. There was a disgusting duvet at the bottom of the shed that was soaking with his own urine. Because of the muck and the filth, his tail had urine burns, so by the time we found Gizmo he had already amputated about two inches of his own tail. 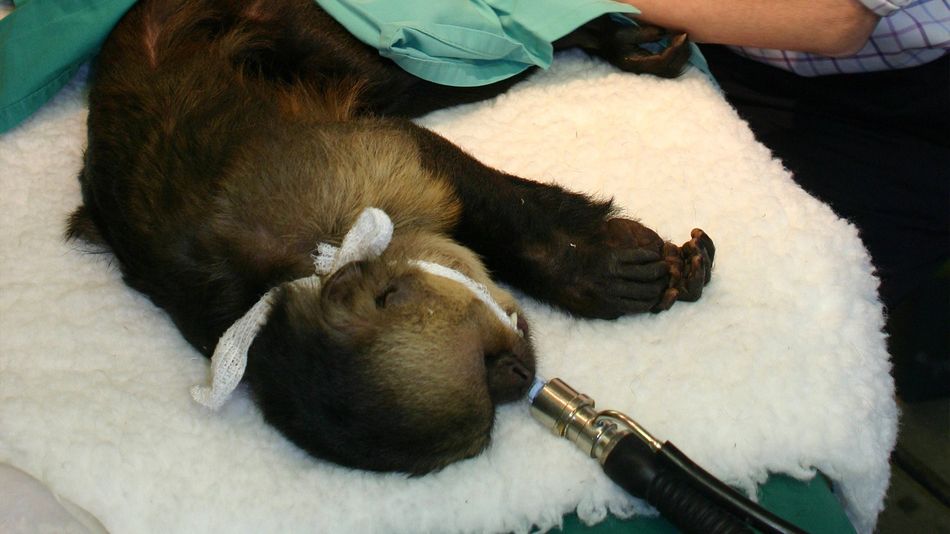 Gismo a Capuchin has an operation. He was born in captivity and lived as a pet in a shed in the back garden of a house in Ipswich.

‘It was a bloody, angry, swollen stump. It was just awful. We had to amputate another inch and a half to get to healthy tissue. But he’s been with us 20 years now.’

It is partly thanks to this binder – and all the faces of monkeys staring out from the cover – that the Government is finally taking action. Legislation that is going through the House of Commons will make it illegal to buy, sell or barter for a primate in Britain. Those who already own a monkey will be given six months to register it with the local council, and then another 18 months to ensure they are being kept correctly. This means indoor and outdoor accommodation, companionship of their own kind, appropriate vet care and a good diet. Anyone who isn’t up to the task will have their pet seized. 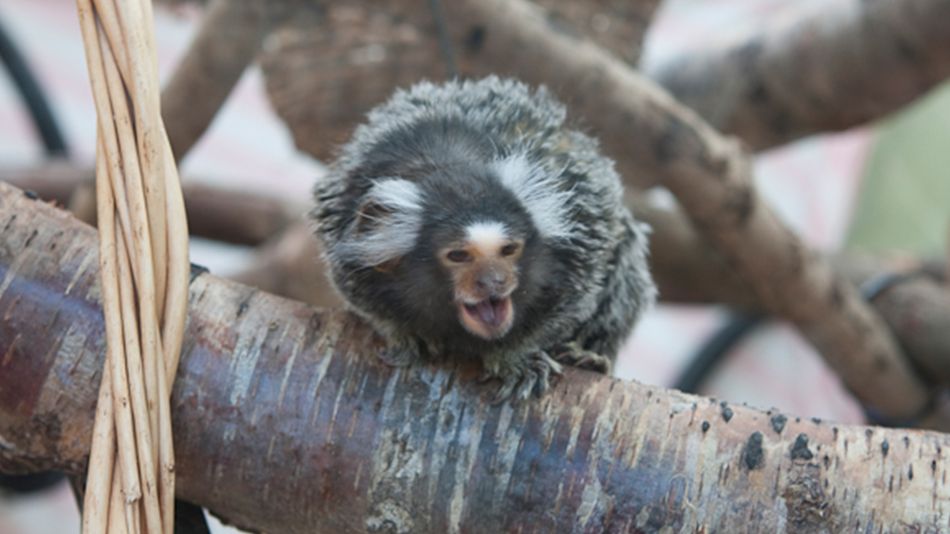 ‘My waiting list is already over 120,’ Alison said. ‘And that’s from people who are well-meaning but now realise they’re part of the problem, who have purchased these animals and realised it’s not right now. I’m always surprised year in, year out, what comes our way and the circumstances. I guess, to sum up, in terms of the British pet trade, I’m shocked and stunned that in a nation of true animal lovers, this trade has been allowed to continue and develop in a very sinister manner.’

She adds: ‘We’re now finding road accident marmosets on the streets of London, or lone marmosets leaping across railway stations in Scotland. That shouldn’t be happening here.’

Some of the animals at the rescue centre are not ones that would spring to mind when considering a new pet – chimpanzees, which can weigh up to 70kg, have a physical strength about 1.5 times greater than humans. 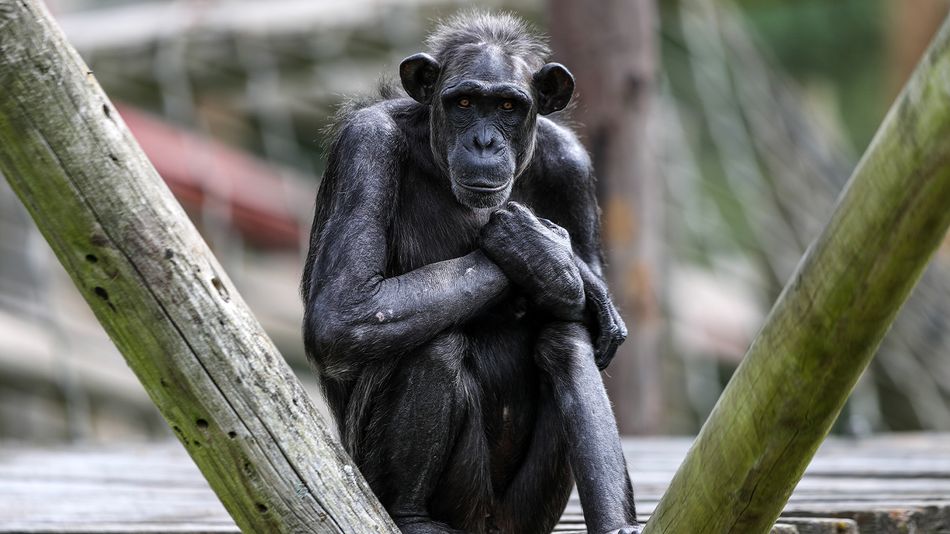 Semach, a Chimpanzee, was rescued in 1996 from Israel where he had been smuggled for the illegal exotic pet trade

The first enclosure we come across at the centre houses 18 animals, with some rescued from the pet trade in Saudi Arabia, Israel and Spain. Charlie Crowther, marketing manager at Monkey World, tells me most will have been captured from the wild as babies. ‘All of the family are killed, because the group will try and protect the baby,’ she said. ‘It’s estimated that for every baby chimp smuggled for the pet trade, 10 adults are killed.’

We’re also introduced to Paul, a male agile gibbon who was confiscated by the Taiwanese authorities after he had been smuggled into the country for the illegal pet trade. 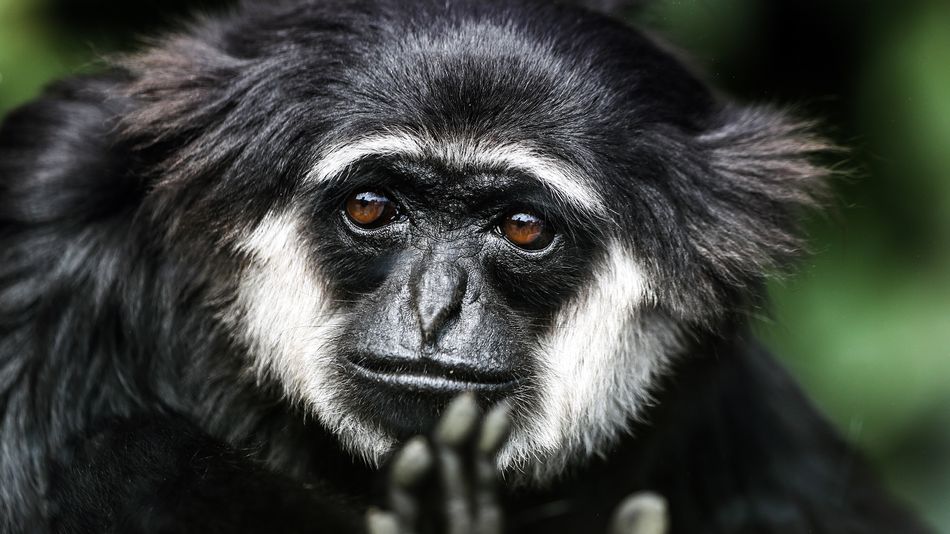 Paul was confiscated by the Taiwanese authorities after he had been smuggled into the country for the illegal pet trade, before coming to Monkey World in 2000

And then Rieke, a female Sumatran orangutan who was born at Zoo Berlin. Sadly her mother refused to care for her, so she was brought to Monkey World to join their orangutan creche. 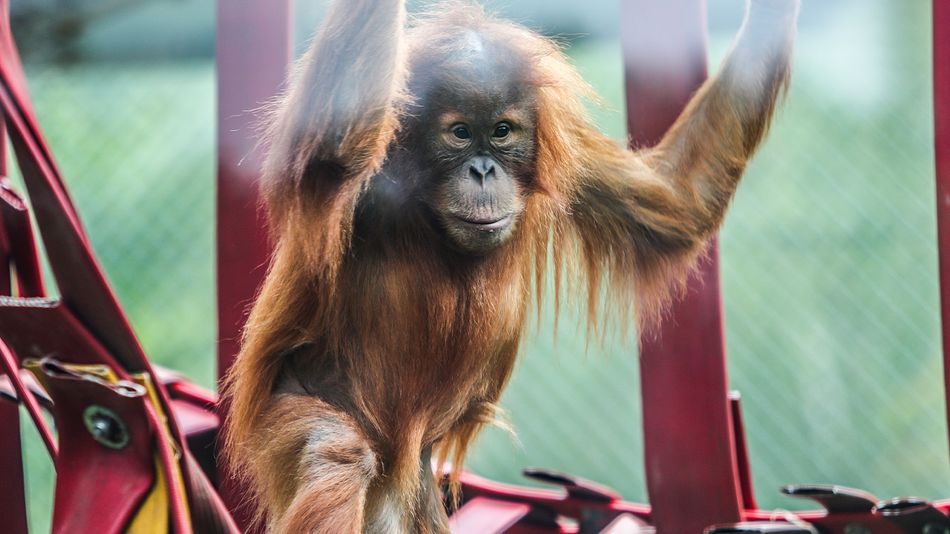 Rieke the Sumatran Orangutan was abandoned by her own mother

While all of these monkeys are now healthy – and very clearly, happy – there are still potentially thousands in the UK who are suffering alone. It is hoped, when the legislation finally goes through, that adverts for £1,700 baby monkeys snatched from their parents’ backs at a young age will cease – and those who already own primates will no longer think it acceptable to ‘keep them in a bird cage on top of their TV’.

When asked how she feels about the way Monkey World has grown in the last 34 years, Alison said: ‘It’s a sad reflection of humankind – the way our rescue work has expanded and developed globally to address what mankind has done to our closest living relatives. ‘It’s been a pleasure and a privilege to work these with primates. We’re here for those who don’t have a voice.’